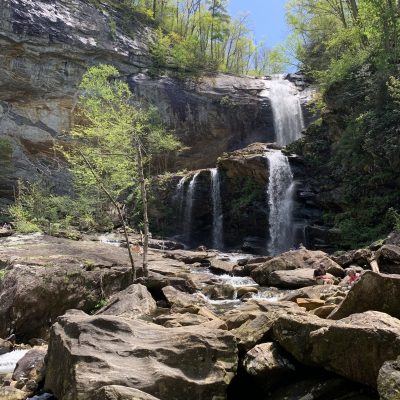 For only eight days each year during the early spring and summer months, a mystical event occurs at High Falls Trail, a local’s favorite hike and waterfall at Lake Glenville. This magical, some would say, biblical experience is the dam release at High Falls and Lake Glenville. Duke Energy opens up the Thorpe Dam, which transforms the normally placid cascade of High Falls into its alter ego, a large, thundering waterfall and the dam water is freed into Lake Glenville. High Falls Trail is a popular three-quarter-mile hike down to the base of the falls, and during dam release days, hikers make the trek down to see the dramatic and incredible transformation, while kayakers take advantage of a new river run. It’s no coincidence the flow rate is perfect for kayakers when the dam is unconstrained. The American Whitewater Association worked very closely with North Carolina’s prominent power company to create this thrilling stream. 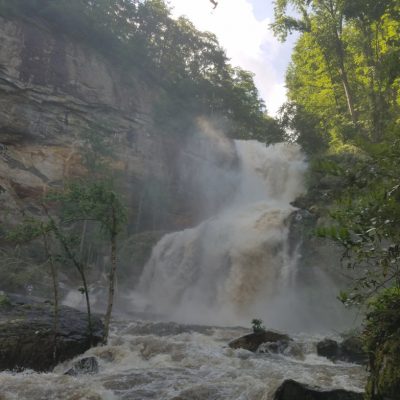 Pro tip: Grab your morning coffee from Buck’s in downtown Cashiers, or a delicious kouign amann pastry from Valley Bakery before heading to the falls at least an hour before the dam is released at 10AM. There will be a mad rush down to the bottom, but it will be well worth it to claim an excellent viewing spot — the calm before the storm. It is an exciting and exhilarating experience to watch a small stream of water turn into a great waterfall right in front of your eyes. Beginning at 10AM and until 5PM, the flood continues and so does the entertainment of watching kayakers launch from the bottom of the falls and shoot down class II, III and IV rapids that head downstream for 5-plus miles. About 2,000 gallons of water per second falls hundreds of feet, engulfing the canyon in an echoing thunder and covering everything in a cooling, beautiful mist.